The BASF Clearfield Plus Winter Wheat Variety Qualification Protocol (QP) is conducted annually at two field sites in Oklahoma. Entries comprising the trials are submitted by wheat breeders from Colorado State University, University of Nebraska-Lincoln, Kansas State University and Oklahoma State University (OSU). Collaborative programs in the respective states follow the same testing protocols, though experimental line entries may differ slightly among host institutions. The standard mandated check, Brawl CL Plus, does not change. These trials ensure candidate lines satisfy expectations for commercial tolerance of Clearfield Plus varieties. Table 1 contains the actual three-year summary of QP data submitted to BASF in 2020 to support commercialization of Strad CL Plus. Similar herbicide tolerance was demonstrated between Strad CL Plus and the commercial standard, Brawl CL Plus, at twice the labeled rate. Support for commercialization by BASF cleared the way for Oklahoma Agricultural Experiment Station release of Strad CL Plus in fall 2020.

Strad CL Plus offers distinguishable superiority in canopy hygiene throughout the grain filling stages to either Brawl CL Plus or Doublestop CL Plus, related in part to natural infections of Septoria tritici blotch and leaf rust, and to some extent, bacterial streak. Breeding trials in 2019 and 2020 showed a 5-to 6-bushels-per-acre yield advantage of Strad CL Plus over Doublestop CL Plus and similar herbicide tolerance.

Six bulk F2 populations segregating for genes conferring tolerance to the ACCase-inhibitor herbicide quizalofop-P-ethyl involving AXigen-traited Wheat Improvement Team (WIT) germplasm were field tested in 2020 for the first time. Selections were made from all populations to initiate progeny testing and herbicide tolerance selection during the 2020-2021 season. Because these are backcross populations, or about 75% OSU parentage, progeny with two-gene herbicide tolerance will occur with low frequency but have the propensity for immediate adaptation to central Oklahoma environments. That was the tradeoff deemed acceptable for this first cycle of selection.

Doubled haploid (DH) lines from at least 10 unique cross combinations were generated in partnership with Heartland Plant Innovations (Manhattan, Kansas) to accelerate the development of candidate lines adapted to the CoAXium production system. Marker selection was imposed during DH development, so only those progenies with two-gene herbicide tolerance would be retained. At the time of submitting this report, the precise number of DHs with two-gene tolerance is not known, but all progenies will be placed under accelerated seed increase at Yuma, Arizona, in fall 2021. Additionally, all cross combinations were placed into a dual, conventional bulk-population selection pipeline to ensure maximum returns on research investment. Progenies derived from this GrazenGrain pipeline will lag behind those from the DH pipeline by about three to four years in testing and possible release.

Metribuzin is a herbicide developed in the early 1970s by Bayer Crop Science. This herbicide falls in the photosystem II inhibiting site of action group and is a preemergence (PRE) herbicide with plant uptake coming primarily from the roots. Metribuzin has been a commonly applied herbicide in corn and soybean, and soon after its launch, metribuzin was used regularly in winter wheat. The metribuzin herbicide label contains a list of tolerant winter wheat varieties to which metribuzin can be applied and a counter list of varieties to which metribuzin should not be applied. However, this list has not been updated in four decades, such that varieties commonly planted when the herbicide was released have fallen out of planting acreage. This has led to uncertainty among producers to apply metribuzin to their winter wheat crop and consequent selection of weed biotypes with resistance to other more popular herbicide sites of action.

Metribuzin applied properly to tolerant varieties has shown efficacy and suppression of troublesome grassy weeds in wheat such as bromes, Italian ryegrass, feral rye, annual bluegrass, vetch and many other broadleaves common in Oklahoma. Increases in herbicide-resistant weeds, coupled with no new herbicide sites of action being released in almost 30 years, supports further evaluation of older but effective herbicides. 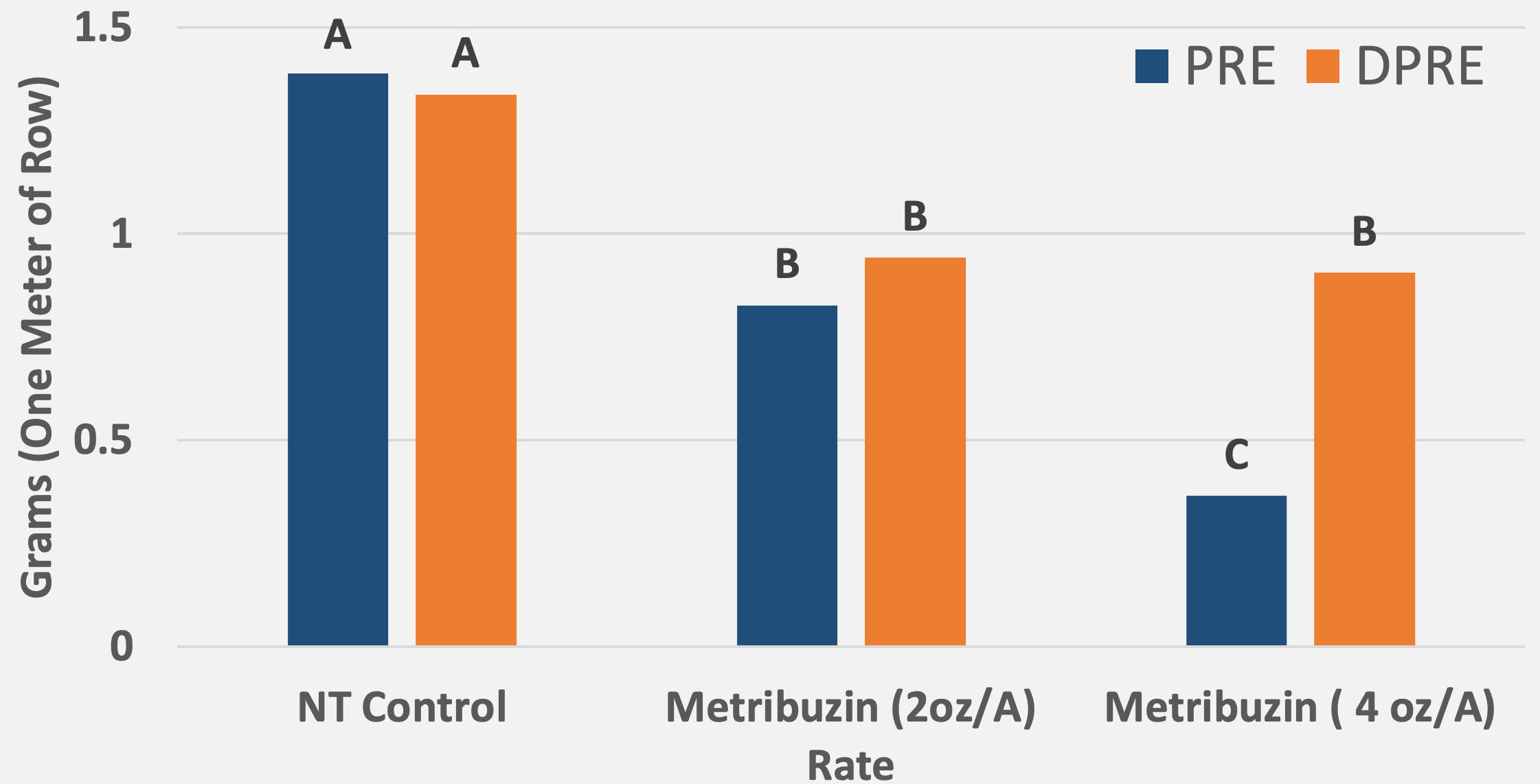 For aboveground biomass measured at harvest, both a metribuzin rate effect and a variety effect were detected. Biomass following the 2-ounce rate versus the 4-ounce rate was not significantly different. Uncharted produced a significantly lower amount of biomass compared to the other three varieties (Figure 2).

Figure 2. A variety main effect observed for aboveground biomass at Fort Cobb and Perkins at harvest.

For grain yield, a herbicide rate by variety interaction was detected at Perkins (Figure 3). Showdown yields were similar regardless of metribuzin rate. Varieties Uncharted and Fusion did not show a reduction in yield between the nontreated and 2-ounce rate; however, the 4-ounce rate resulted in the lowest yields at the Perkins site. There was a sequential reduction in yield for Strad CL Plus from the nontreated to the 2-ounce rate to the 4-ounce rate.

Figure 3. A wheat variety by metribuzin rate interaction at Perkins for yield (bushels per acre).

At Fort Cobb, an application rate by timing interaction was associated with a significant reduction in yield relative to the nontreated control for only the 4-ounce PRE treatment. At Dacoma, the only no-till site, grain yields reflected a variety by application timing interaction. Strad CL Plus yielded the highest, with no difference between the PRE and DPRE timings regardless of metribuzin rate. Showdown yields at the DPRE and PRE timing were similar to Strad CL Plus at the DPRE application, regardless of metribuzin rate. Uncharted at both applications yielded comparable to Showdown and Fusion at the DPRE timing. Fusion at the PRE timing represented the lowest yield in the trial.

In conclusion, Showdown and Strad were the more tolerant varieties of the four, while Fusion and Uncharted were the most susceptible. The 4-ounce metribuzin rate often resulted in significant wheat injury and should not be applied at the PRE or DPRE timing. The 2-ounce metribuzin rate applied either PRE or DPRE resulted in little wheat response and is a viable treatment for some varieties. An additional year of research should help determine the proper timing window.