Central to the research direction of the Wheat Improvement Team (WIT) is to select wheat lines with superior disease resistance. This information is combined with agronomic data to populate all WIT variety development pipelines (VDP). Ideally, the disease evaluation data would be obtained from field trials where the lines are exposed to diseases in a natural setting. However, due to environments that may not favor disease development (e.g., drought), consistent procurement of field data every year is not realistic. Hence, this program is focused on developing and utilizing auxiliary greenhouse tests for the foliar diseases leaf rust, powdery mildew and tan spot.

Testing methodology was further refined in 2020 to inoculate and evaluate the reaction of both seedlings and adult plants to each of those three diseases. This process involved producing inoculum of each pathogen, then inoculating wheat lines in a humidity chamber that critically maintains free moisture on leaf surfaces (Figure 1). 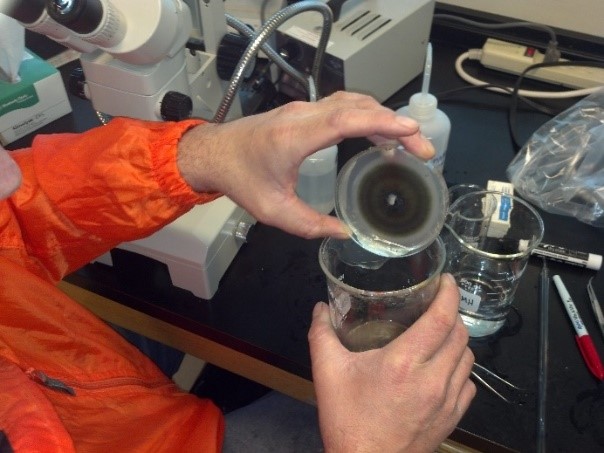 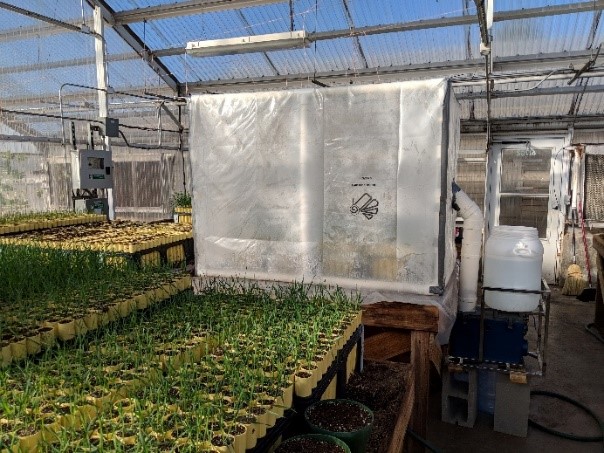 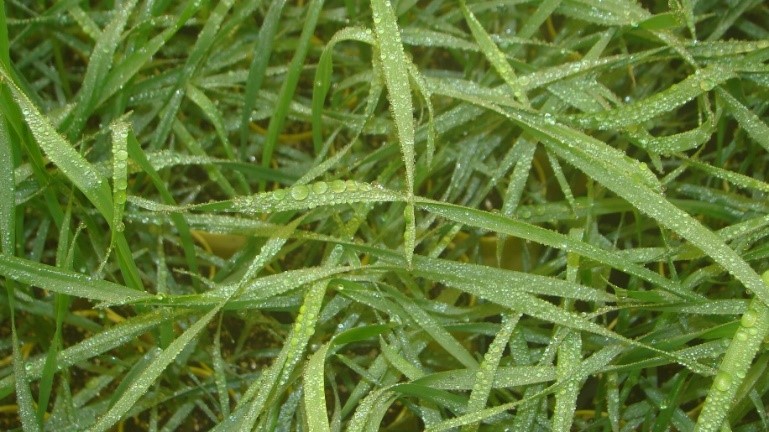 Figure 1. Production of inoculum of the fungus that causes tan spot of wheat (A), wheat lines awaiting inoculation in a humidity chamber in the greenhouse (B) and leaves of inoculated plants with abundant free moisture in the humidity chamber (C).

During the past two seasons, testing for APR for leaf rust, powdery mildew and tan spot intensified as the procedure for doing this type of evaluation became more informative. During 2019-2020, the following seedling and adult plant reactions were determined among several hundred WIT lines in the F7 generation or later.

It is anticipated these evaluations will continue and perhaps increase as they enable line advancement in the VDP. Currently, only under rare circumstances would a leaf-rust susceptible line be advanced. Moderate susceptibility to powdery mildew or tan spot in greenhouse tests may be allowed but not if coupled with highly susceptible reactions in the field (if available). Released varieties by WIT have progressed toward lesser dependence on requisite fungicide applications. Testimonial to this practice are the recent releases Skydance, Baker’s Ann, OK Corral, Uncharted, Strad CL+, Butler’s Gold and Big Country.

Targeted disease evaluation of WIT lines does occur in field nurseries. In 2019-2020, 900 WIT lines were planted in a field nursery to test for reaction to the virus disease complex known as wheat soilborne mosaic/wheat spindle streak mosaic (WSBM/WSSM). Nearly 40,000 WIT lines have been evaluated for WSBM/WSSM reactions since 1983. Unfortunately, for an unknown reason, no disease symptoms developed the past two seasons in this nursery near Stillwater. Hence, future research will look to employ marker-assisted selection (MAS) that detects the presence or absence of the gene that confers resistance to WSBM.

Another field nursery is planted annually with the most advanced WIT lines with the anticipation to rate barley yellow dwarf, powdery mildew and/or stripe rust. To help provide inoculum to the wheat lines being evaluated, researchers are planting alternating strips of a wheat variety susceptible to all three diseases. In 2020, only the incidence of stripe rust in this nursery was of sufficient severity to allow the rating of 230 lines for reaction to this disease.

Finally, evaluation of other diseases is conducted through collaboration with pathologists in other states. For example, evaluation of WIT wheat lines for reaction to stripe rust is conducted with USDA-ARS collaborators in Kansas and Washington, and evaluation for reaction to wheat streak mosaic is conducted with a collaborator in Nebraska. These external evaluations, in combination with our greenhouse testing and field testing – which include breeder trials, extension variety trials and demonstrations – provides much of the disease reaction data used to support advancement decisions in the VDP.

Tan spot of wheat, which is caused by the fungus Pyrenophora tritici-repentis (PTR), can significantly reduce yield, especially in no-till production systems where wheat residue remains on the soil surface. This residue harbors PTR inoculum that infects the new wheat crop.

The pathogenicity of PTR mainly depends upon the production of host selective toxins (HSTs). ToxA is a major necrosis-inducing HST and according to our research, has been found in almost all PTR populations in Oklahoma. Based on the production of these HSTs in wheat differentials, eight races of the fungus have been recognized. In Oklahoma, 27 PTR isolates have been characterized phenotypically, and results show race 1, which produces ToxA, is the predominant PTR race in the state.

Currently, RNA (ribonucleic acid) interference using double-stranded RNAs (dsRNAs) that target ToxA expression is being evaluated to reduce disease development. Co-incubation of the fungal spores with Cy3-labeled long dsRNA controls demonstrated that germinating spores and hyphae of PTR are capable of taking up exogenous dsRNA, indicating specific dsRNAs designed for ToxA could silence this gene (Figure 5). This is the first step in evaluating the use of spray-induced gene silencing (SIGS) of ToxA in PTR. SIGS is a technique where dsRNAs are used to protect crops from disease. These dsRNAs are sprayed onto plant surfaces, which are taken into the plant (but not incorporated into the plant’s genome) then target a specific pathogen gene to silence its expression. The result is minimization of disease development. 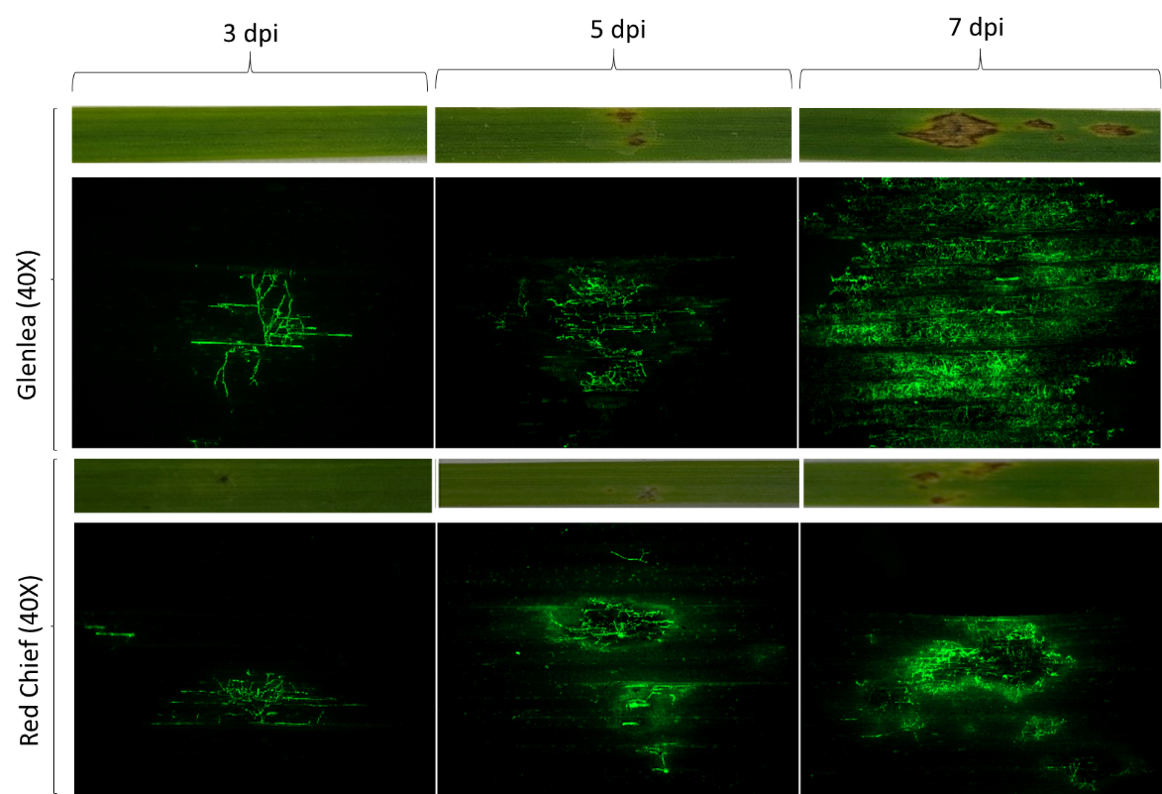 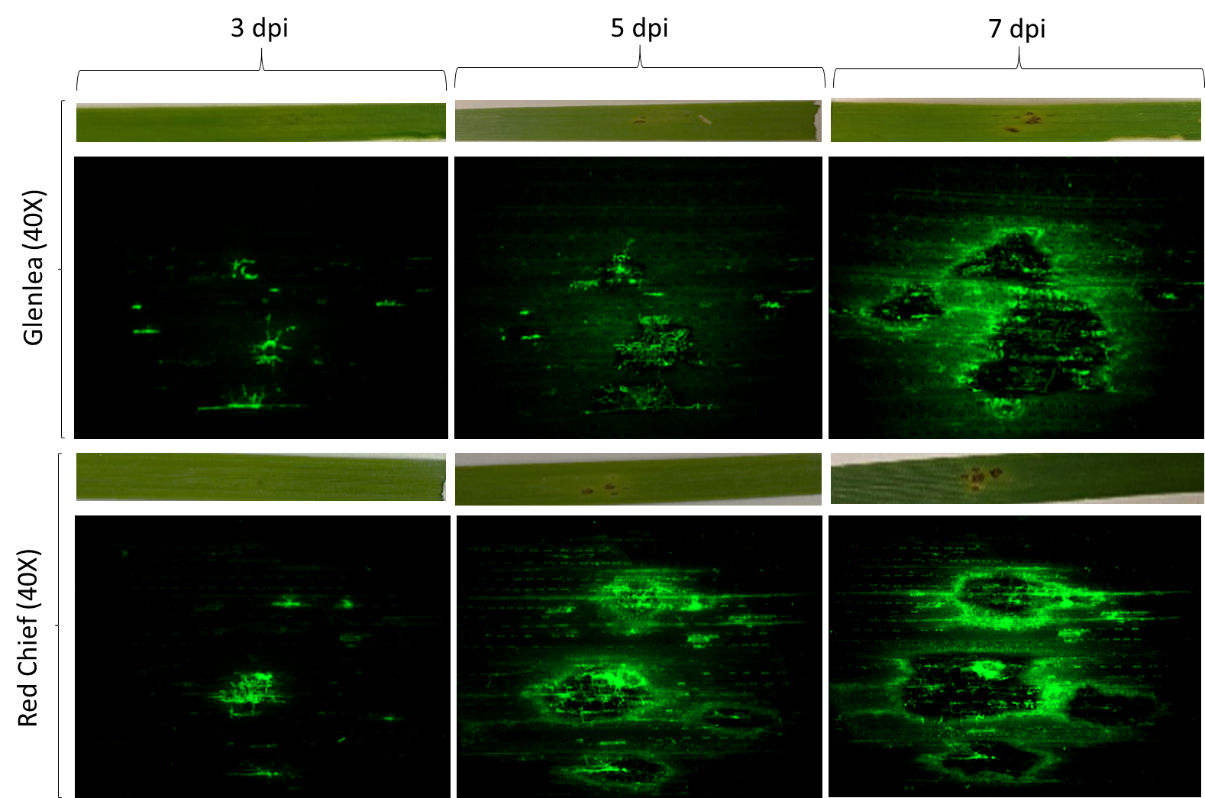 Figure 4. Colonization and infection of susceptible (Glenlea) and resistant (Red Chief) wheat differential cultivar leaves by a toxa- PTR isolate expressing green fluorescent protein at three-, five- and seven-days post-inoculation (dpi). Note here how the green fluorescence appears more restricted in both varieties, because no toxin is being produced. 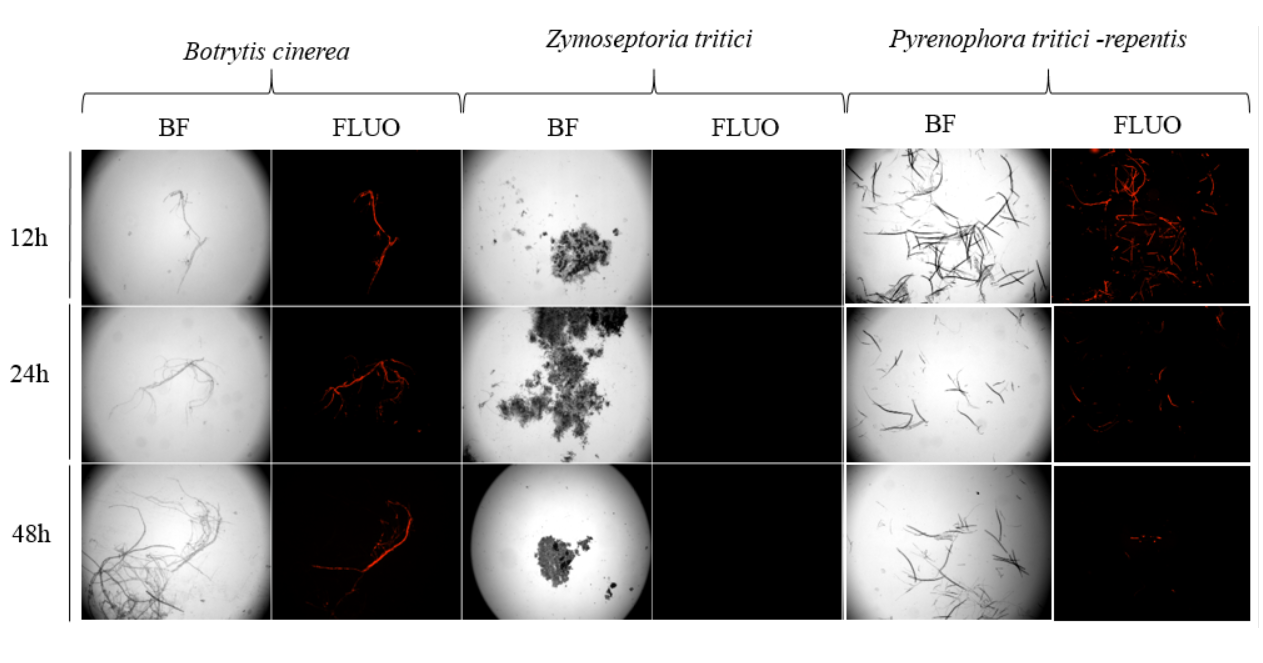 Figure 5. Assessment of double-stranded RNAs (dsRNA) uptake by spores and hyphae of Pyrenophora tritici-repentis (PTR) and control fungi. Uptake of red fluorescent Cy3-labeled dsRNA transfection control observed in PTR and Botrytis cinerea after 12, 24 and 72 hours of co-incubation but not in Zymoseptoria tritici. Representative images were captured with bright field and fluorescent filter. B. cinerea serves as a control as it is known to take up dsRNA. There is no uptake in Z. tritici, but there is in PTR, as indicated by the red fluorescence.