During the past 22 years, the Oklahoma State University (OSU) wheat variety development program has evolved from a single pipeline built upon the GrazenGrain breeding system to a program now serviced by five pipelines (Figure 1). The fifth pipeline, derived from germplasm developed by retired Wheat Improvement Team (WIT) member Art Klatt, is no longer active, but products of that pipeline remain candidates for possible release (e.g., Big Country, 2020 release) or are recycled as breeding stock for the other pipelines. 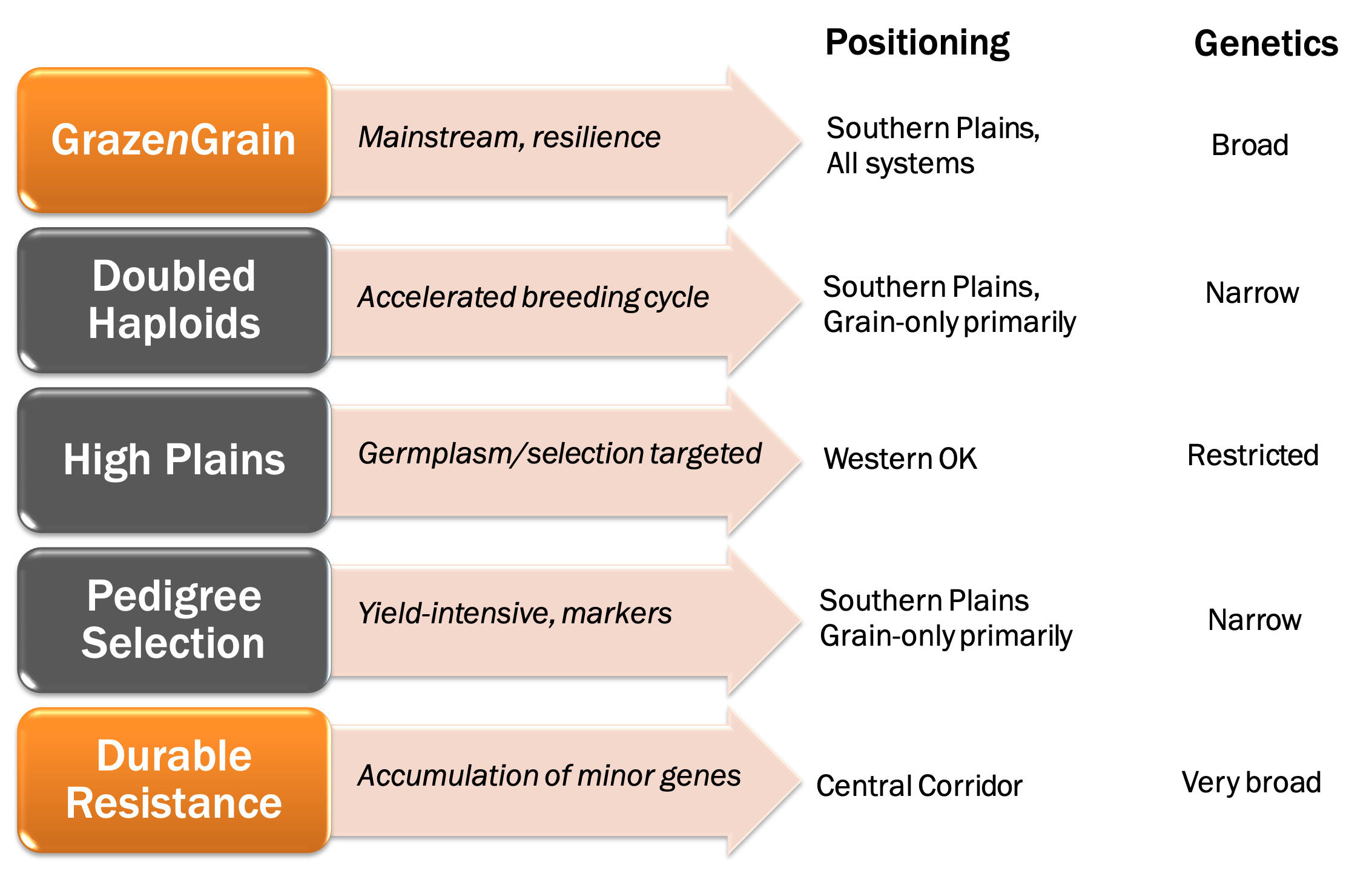 Figure 1. The OSU wheat variety development pipeline is actually five pipelines, with more under design or construction. Each pipeline is built from pools of germplasm varying in genetic breadth. Each pipeline produces independent sets of progenies with different adaptation patterns for optimal positioning at the time of release.

A genetic pipeline has three essential design components: a) breeding methodology, or the selection strategy used during the formative early inbreeding generations spanning from the F2 through the F6 generations (excluding the Doubled Haploid pipeline), b) the environment(s) in which or the conditions under which experimental line selection occurs prior to line testing and c) genetic makeup of parental lines used to feed each pipeline.

Where or how selection takes place is paramount to where or how line testing occurs. Selection occurs in generations long before the public ever sees the germplasm. Genetic potential is set during selection, whereas line testing only allows visualization or realization of that potential. Note that a trait system, such as Clearfield or CoAXium genetics, does not constitute a pipeline. Trait targets may traverse one or more pipelines. Clearfield lines are produced from five of the six pipelines in Figure 1. Likewise, varieties best fit for a dual-purpose system may originate from all six pipelines, although the probability of producing a dual-purpose adapted line is highest from the GrazenGrain pipeline. Hence, WIT’s strategy of deploying multiple pipelines was truly based on the desire to increase the probability of achieving a certain outcome in the form of a new variety. Interestingly, the same cross may proceed through two pipelines yet produce visibly different sets of progenies with appropriately different adaptation signatures or patterns — again, as a result of where or how selection occurred to create the progenies.

The doubled haploid pipeline produces a commercial product about four years earlier than any other pipeline, yet this pipeline must be limited to a very small proportion of OSU germplasm (<5%). It allows WIT to turn a breeding cycle from parent to commercial-ready offspring (e.g., from Gallagher to Smith’s Gold) much faster, thus allows greater potential genetic gain over a given period. However, there are drawbacks; most notably, the loss of selection opportunities that go hand-in-hand with loss of genetic recombination events. The High Plains pipeline will produce its first variety in 2021 or 2022, a very noteworthy event. Germplasm produced from this pipeline will more closely resemble, thus better compete with, germplasm produced from High Plains breeding programs in Texas, Colorado and Kansas. The pedigree selection pipeline features repetitive cycles of selection for yield potential among and within early generation families, a feature that has no parallel in the other five pipelines. Molecular markers tend to be featured more in this pipeline than in others and need to be featured more in the future on a genome-wide basis.

Varieties released by the Oklahoma Agricultural Experiment Station from 2017 to 2020 can be attributed to the five pipelines listed below. Surprisingly, Butler’s Gold is not recommended for grazing systems, even though it was a product of the GrazenGrain pipeline. Butler’s Gold was first selected as an experimental line during the extremely unusual harvest year of 2012, when spring conditions highly favored accelerated development and early maturity.

WIT was extremely active in 2020 for bringing new varieties to a launch point. Factors leading to such a high number of releases were rare and coincidental. Five of the six pipelines produced commercial-ready germplasm at the same time, after having been subjected to statewide testing for a highly variable number of years. For example, Uncharted was tested for the minimum of three years; Strad CL+ and Big Country went through an unprecedented nine years of statewide testing. Most importantly, the five varieties released in 2020 are positioned in disparate and highly targeted ways: early-planted grazed systems (Uncharted), the Clearfield management system (Strad CL+), panhandle production in the presence of wheat streak mosaic (Breakthrough), late-planted scenarios (Butler’s Gold) and white wheat production likely to be contracted (Big Country). Their differences are further illustrated in Figure 2 for five important traits. One obvious trait deficit in this set of five varieties was the lack of seedling resistance to Hessian fly based on greenhouse assays. This deficiency is not a long-lasting indicator but a reflection of the parents used to create this particular set of varieties. 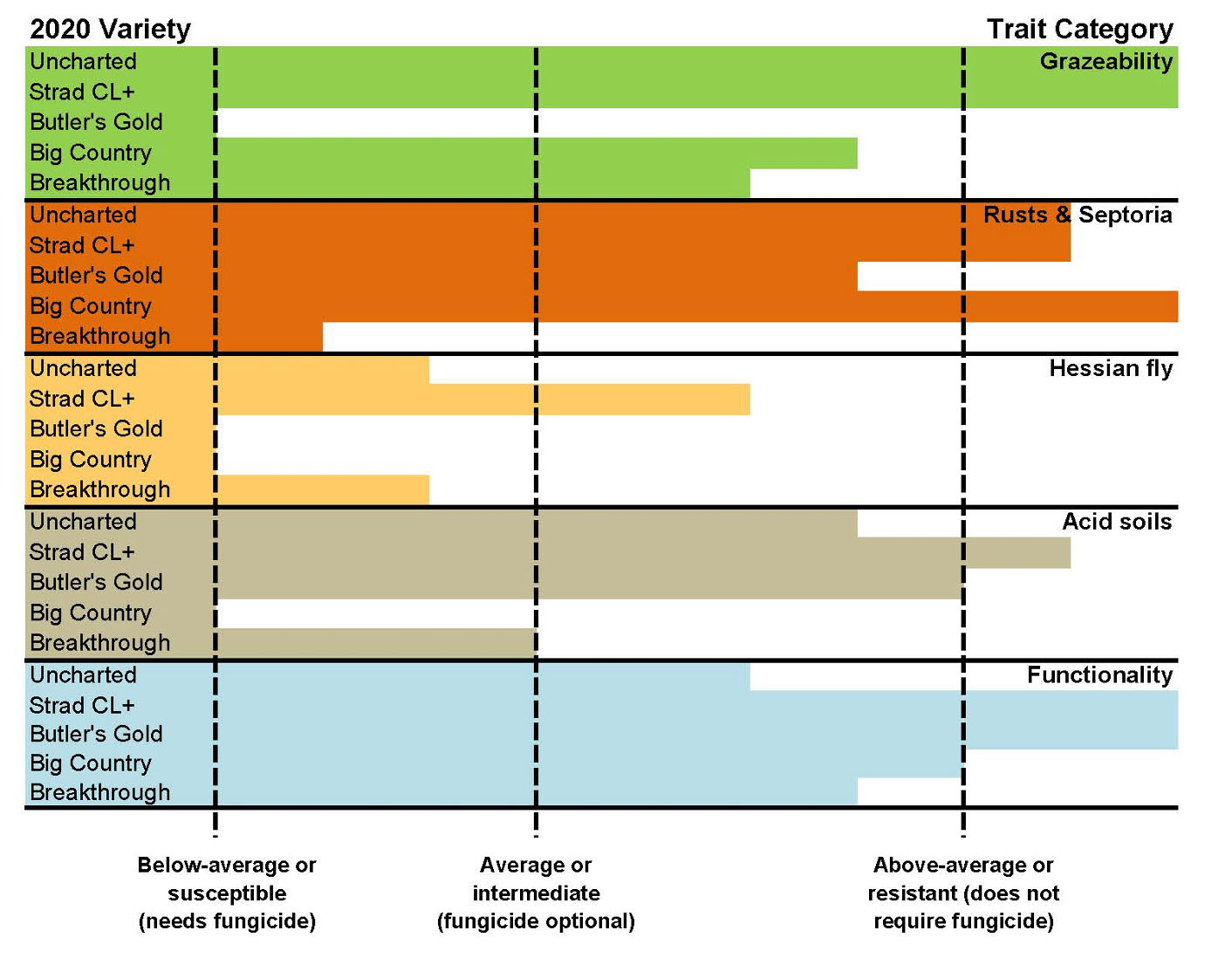 Figure 2. Comparisons among the five wheat varieties released by OAES in 2020 for five trait categories

The year 2020 brought to closure a piece of Wheat Research Foundation-sponsored genetic research that started in 2014. Among several other objectives, one objective of this 6-year project was to more accurately portray the genetic gain in grain yield in Southern Plains wheat germplasm, using the number of generations removed from Turkey, the hard red winter progenitor variety, as the timeline rather than cultivar release date. Much of the germplasm in this analysis came from the OSU wheat improvement program. Over a century-equivalent span of six generations or breeding cycles, and in the absence of supplemental irrigation, grain yield increased 77% (Figure 3). With a very tight-fitting linear response, the current trajectory indicates no apparent genetic plateau; therefore, additional yield gains are expected. Wheat protein concentration decreased 1.1% per breeding cycle, but the most advanced breeding cycles still maintained mean protein concentrations exceeding the industry target of 12%. This reduction in wheat protein did not result in lower dough strength pertinent to bread baking (see publication at doi.org/10.1016/j.jcs.2020.102986). 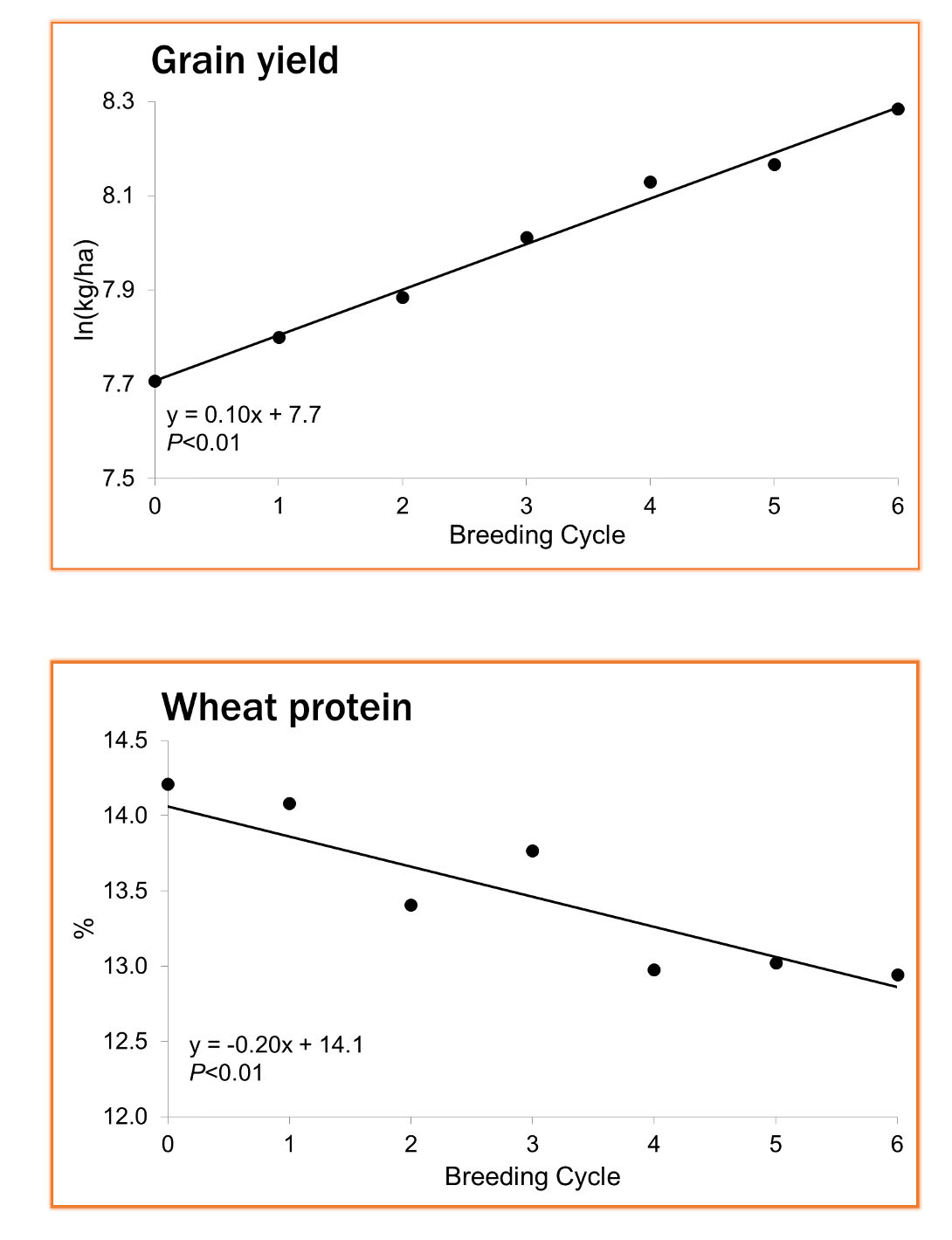